​Anthony Davies completed and exhibited his screenprint series ‘Camouflage: With Attitude’. Nos. 1 – 10 in 2004-05, with Nos. I – V following several months later.  It is as if he was still be nagged by ‘Camouflage’ and needed, as Sir Edmund Hillary has remarked, to “knock the bugger off”.  The final (we presume) five prints, then, are the summing up, the loaded dregs, the necessary essence of an intense outpouring.

In this manifestation Davies has found succinct distillation of the forces which drive him.  If we can imagine prints 1 – 10 as evoking the intensity of rehabs early days, in I – V results are beginning to appear.  The vision is clearer; the situation may still be dire, but a way through can be negotiated.  The cacophony of images and voices is purer, more direct.  The chaos of overlapping images has been refined, stripped down and pared away.

Davies has most obviously separated the group I – V from its predecessor by using variations of the same tan wash.  Instead of multiple layers of colour which fizz and jostle the eye, in Nos. I – V the tone is more subdued, less riotous; we can access the information more directly.  Without the dance brought on by conflagrations of colour, and keeping us at a safe distance, we are allowed to move into the work – if we dare.

It is the darker seam of human nature which grips Davies.  He shows opponents – media, politicians, gangs, youth, police, - reacting to each other.  Themes recur: race, violence, dysfunctionality. Ignorance is a particular bugbear, seen, for example in the mix of youth and vehicles, speed and alcohol.  Deforestation, bullying and abuse – political and family orientated – are forcefully brought to our attention.

Davies collects data from his immediate surroundings and relates media stories to his own experience.  He also channels world news.  Perhaps he recognises that negative overseas trends have a habit of showing themselves in NZ (all too often after they have been discredited elsewhere).  As a foreigner, it is ironic that he looks so deeply into this country’s character.  His outsider status has allowed him to penetrate areas often overlooked or neglected by New Zealanders.
New Zealand has got under Davies’ skin, for better or worse.  Local murders – Coral Burrows, Tania McKenzie, youths attacking with knives in Wanganui – and the ensuing media circuses are fodder for his curiosity.  Universal horrors find expression in local events.

Luckily, Davies also shows the flip side of man’s destructive tendencies.  When his scenarios threaten to reveal no escape, by looking hard we can find release in a flight of birds, or a laughable expression.  His sophisticated use of pattern and colour also help to relieve the onslaught.  While Davies’ inclination is to take no prisoners, he recognises most people need to see a half-full glass, and he offers just enough relief.

The background swells with pixelated textures, like fingerprints.  Watery, cellular blobs move with their own heavy liquidity.  The camouflage is flamboyant, underlying the clashing deluge of bodies and sparking situations.  Even in the toned-down colour scheme of Nos. I – V, the prints are loud; they make an impact.  Along with conjuring a lively balance and vivid tonal shifts, Davies has tricks up his sleeve.

In using outsized hands to draw us in, Davies involves us, makes us complicit. We are implicated in the scene, made to feel the guilt.  We may not know what the gang signals symbolise, but we take on board their exclusive stance and power to confront.

There is also poetry and motion in the crisp lines of gesturing, signing hands.  They are a form of shorthand, showing both elegance of line and abruptness in the way they stridently beckon.  In No. II for example, hands swoop in from the upper left and lower right, gathering the drama in between in a beautiful, concise symmetry.  Hands framing a background in No III give a cinematic edge and bring the disparate parts to life.

Davies portrays the media as invasive, over-excited bullies as they jostle for position.  We are made to see the fine line between victim and abuser, and become aware of differing levels of power.  In their hunger for a story, the media becomes callous, intrusive, weary of – or oblivious to – compassion.

Words carry power for Davies but he also knows their potential for misuse.  His inclusion of graffiti, tattooing and mob mantras shows the impact that messages from marginal groups can make.  Fear combined with ignorance is a lethal concoction which Davies feels bound to tackle.

His is the energy of outrage.  The tasks involved in making prints allows some of this cerebral questioning to be burnt off physically.  Mentally, he understands about shades of grey – nothing is black and white.  Through his figures, and the stories they tell, we are made to see vulnerability in attitudes of staunchness, and that redemption stems from raw emotions.
*  *  *  *  * 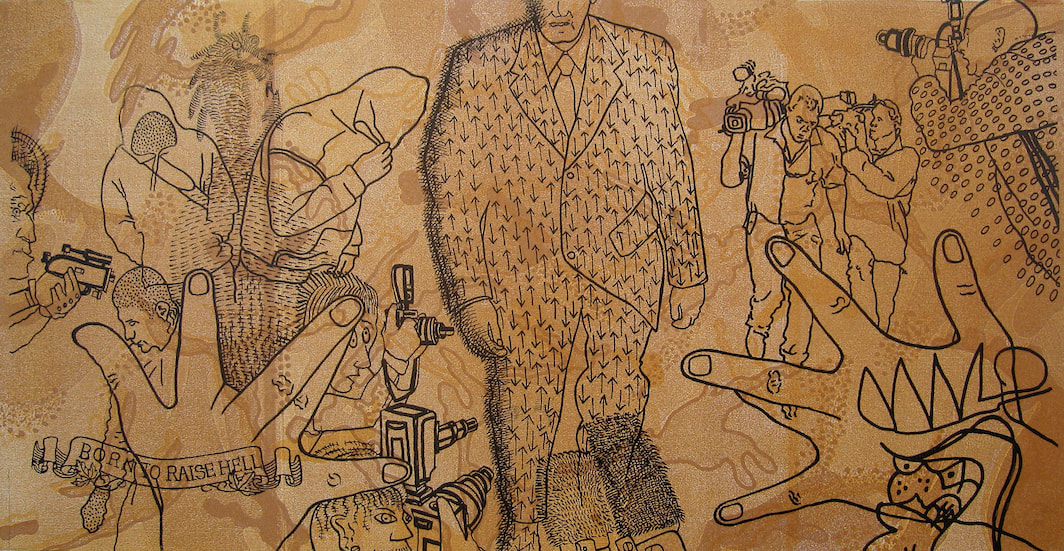 CAMO I
​Hands are held up, signing while fending off intruders.  Cameras and booms point like weapons as an aggressive invasion of media descends.  We can feel the weight of the film camera from the dogged stance of his operator.  The frenzy of the media hordes is reflected in snarling Mongrel Mob graffiti at lower right.

The central figure is so huge he is partially cropped from the frame.  The arrows on his suit seem to reflect helplessness, indecision and victimhood.  He targeted the media, but what for?  Is he celebrity or criminal?

Davies has had fun with the hairstyles and expressions of the media.  The older cameraman at left has an underbite; the younger ones appear in turn gormless and slavishly trendy.  There is an ironic elegance of the scrolled biker tat “Born to Raise Hell”.  Hooded and downcast figures appear to be victims as well as shifty.  One figure dissolves into his hood, camouflaging himself. 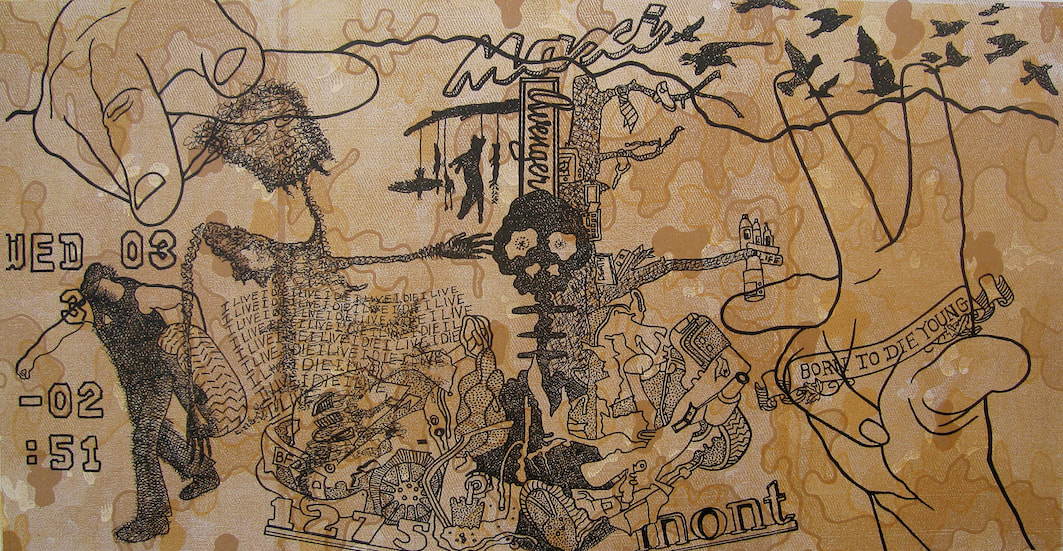 CAMO II
​This print is saturated in car-related symbols of doom.  The hand of God bears down from the upper right corner as if to say: “And God created…life to be casually snuffed out.”
Lower right, another hand gestures, releasing a flock of crows.

From the central pyre of a totalled car, smashed almost beyond recognition, rise ghosts from a horror show.  A scribbled figure is frazzled and disintegrating.  ‘I live I die I live die…’ washes over what is left.  The black demon-like central shape is held erect only by its vertebrae.

Digital numbers and lettering of car models fly from the horrendous impact – ‘Maxi’, ‘1275’, ‘Avenger’.  The only sign of life is a man in black singlet lugging tire.  His identity has been scored out.

‘Life’ and ‘Death’ are inscribed into a leafless tree.  Bottles are lined up on a branch, birds and animals hung deliberately (as guerrillas do in South America).  The tree is festooned with articles of youth – a school tie, a slingshot, electronic games.  A scroll bears the motto ‘Born to Die Young’.

Here we see the results of chance, idiocy, youth and alcohol.  The ease with which life is extinguished is brought forcefully home to us. 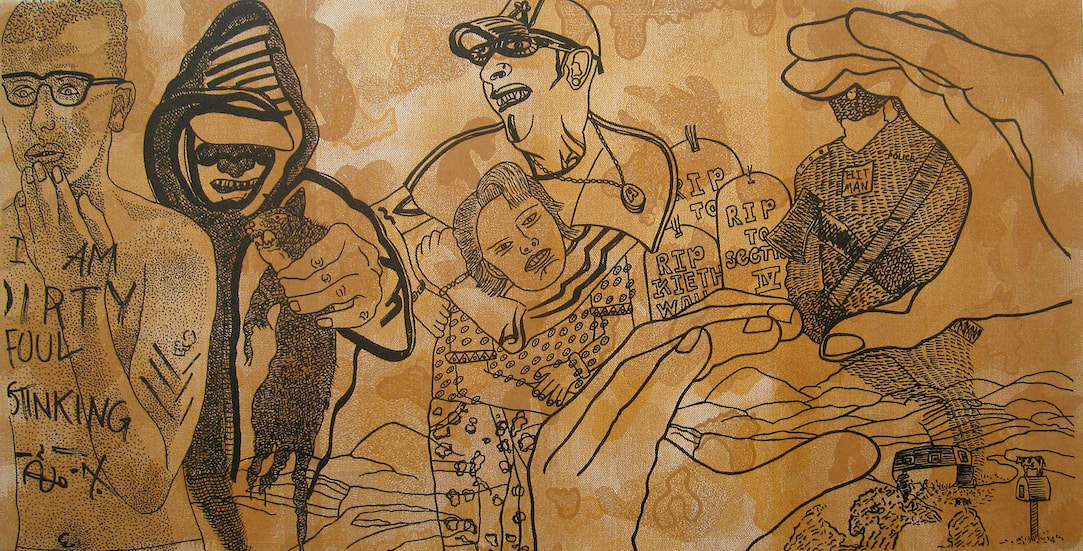 CAMO III
​Davies references an actual army camp incident in the 1960s or ‘70s.  A geeky figure, bewildered and bespectacled stands defenceless.  False stripes mark his arm and graffiti – ‘I am dirty, foul, stinking’ – covers his chest.  Humiliation is the aim of the leering, hooded figure taunting him with a rat.

Another ‘uniform’ is evident in the central baseball – capped figure, with his generic tribal tattoos.  Is his choke hold on an apparently unresisting woman play, or something more sinister?  Tombstones rear out of the background, squashed together, indicating a neverending pile up.

A black hooded, axe wielding ‘Hit Man’ in chainmail uniform flares up like a genie.  Looking more closely, this pattern turns into a road carving through the hills.  Davies slips us a laugh in siting a tiny cow on top of the mailbox – perspective has gone peculiar.  Huge hands gesture like a film director squaring up a shot, blocking out the executioner’s face. 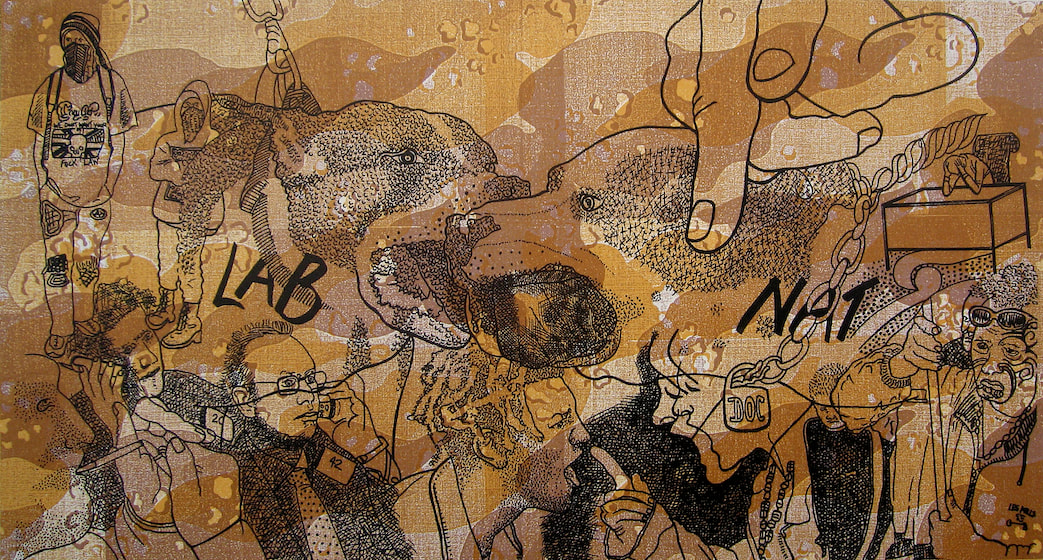 CAMO IV
​Lower right, a fisherman blithely prepares to cast his line.  He is mired in the wet land as are the roots of the tree next to him.  Power pylons rise out of the background arms aloft.  On the left hand side, wind turbines have savage blades, frozen in time.  The line of hills zig zag across the landscape, like dips in a heart monitor or the ups and downs of the stock market.  Cows graze contentedly, fenced in.

No life exists in the central area; devastation reigns.  Scavenging birds and a feral dog comb the pyramid of destruction.  Davies has turned symbols of his concerns into trash.  He revisits familiar territory – a crashed plane, McDonald’s arches, detritus from smashed vehicles – and condenses these indicators of trouble into a lethal heap.  The pileup contains a sprawled body and dismembered toys.  A rocking horse peers out of bags of rubbish; fabric hangs limp from the arms of a coat rack.  Plastic sacks and hazardous waste containers mix it up with designers shopping bags.

A pointing hand looms out of the landscape, demanding attention.  It seems to say ‘Look where all this technology has got us’.  Regular, criss-crossed grids of the pylons present an incongruous stability against the utter confusion below.  All the mess is man-made.  While animals carry on according to laws of nature, it is man in his infinite wisdom who engenders catastrophe.

CAMO V.
​This final print is the busiest.  There is no resolution to conflict; everything is tense.  Davies has no happy endings, this is real life after all.  The assertive hand bears down from upper left.  Arguing crusties have left peaceful agendas aside.  The media are in panic mode, babbling on cell phones, lighting up against the wind.  Balaclava wearing youth stand waiting for an opportunity, or are they just cold?  One youth’s T-shirt reads ‘We Don’t Want War – Fuck Law’; braces don’t seem to gel with notions of criminal apparel.  But appearances are deceptive.

Bull terriers, jaws locked, are centre stage.  They are tagged ‘Lab’, ‘Nat,’ and ‘DOC’; their chains lead out of the picture.  Who is controlling them?  Is it a play fight?  A pattern of crosses sculpts on dog’s jaw.  The angry youth’s dreadlocks appear diseased; here we can clearly see how Davies uses pattern not only for contrast but to set mood.

A mokoed protestor bears a koro flag and sports a ‘Les Mills’ warmup jacket.  A downcast youth wears black and a number two haircut.  A middle manager sits in his executive chair, slumped over his desk – despair infects the middle classes, too.
See the full Camouflage: With Attitude series here